Interactive gamification in Wechat to promote a discount campaign

Impact
Launched in 3 weeks, it brought more around 35,000,000 page impressions with 19,400,000 participants. Being such a success, it was selected as one of the most classical marketing campaign cases in JD.

Every beginning of Chinese New Year, JD, the biggest B2C e-commerce company in China, will conduct an online discount campaign in order to attract customers and drive sales.

The goal of this project is to propagate the upcoming discount campaign and attract potential customers to shop on JD.COM during the campaign.

To achieve the goal of propaganda, we designed Nian — an interactive gamification that can be played and spread in Wechat.
‍
It is featured with:
•  A character in Chinese mythology on the homepage with which users can interact with.
•  Users get red pockets after playing the game.
•  Guide users to share the activity on Wechat in order to get the coupons inside the red pockets.
•  Guide user to shop on JD.COM with the coupons.

Get red pockets after playing the game

•  Users will get red pockets after beating the beast
•  The design of the red pocket is like a special envelope with a seal on its presence, implying that the red pocket is closed now and should be opened to see what's inside.
•  The" seal" is actually a Chinese idiom expressing wishes. 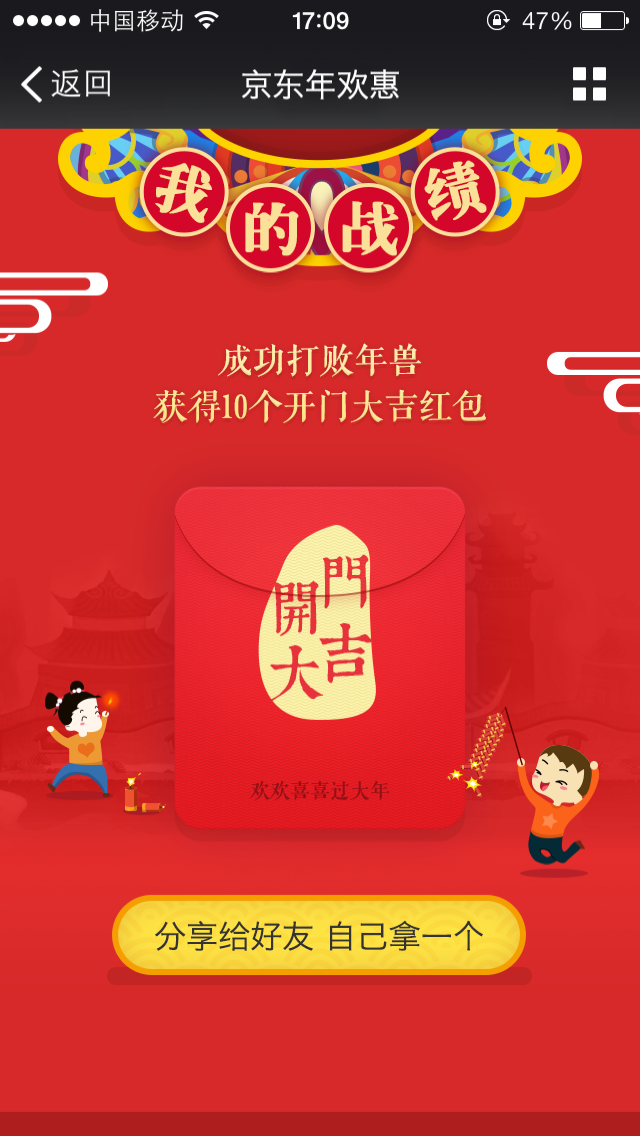 •  Text on the button indicates you can get the coupons inside the red pocket only if you share the activity on Wechat.
•  On the sharing page,  "Nian" 's voice is directing to the sharing button, guiding users on how to share the link.

Guide users to shop after receiving the coupon

•  After users share the link, they will see the coupon inside the envelop.
•  They either click the upper button to use the coupon shopping on JD.COM or click the bottom button to play the game again. 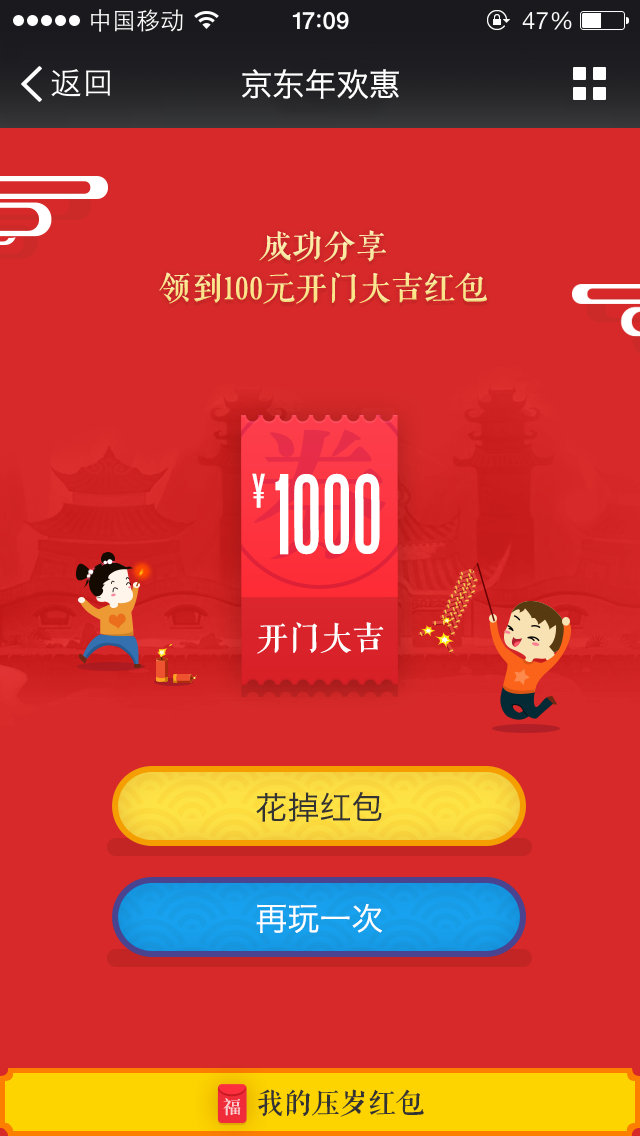 After analyzing several famous and successful marketing campaign cases and reading several reports about the propagation on Wechat,  we concluded the key findings below:

Nearly all the the successful gamificaitions on Wechat are easy to interact with using quite simple rules since users lose patience very easily on Wechat.

Packaging the simple gamification with a good story and striking visual design is the key to attract users' attention on Wechat.

Economical Interest is the key motivation for users to share the activity with others on Wechat.

Based on the research findings and the project goals, we focused our brainstorming on three aspects:
•  How will users interact with the gamification with simple gestures?
•  How to package a story for the gamification?
•  How to motivate users to share the activity as many times as possible? 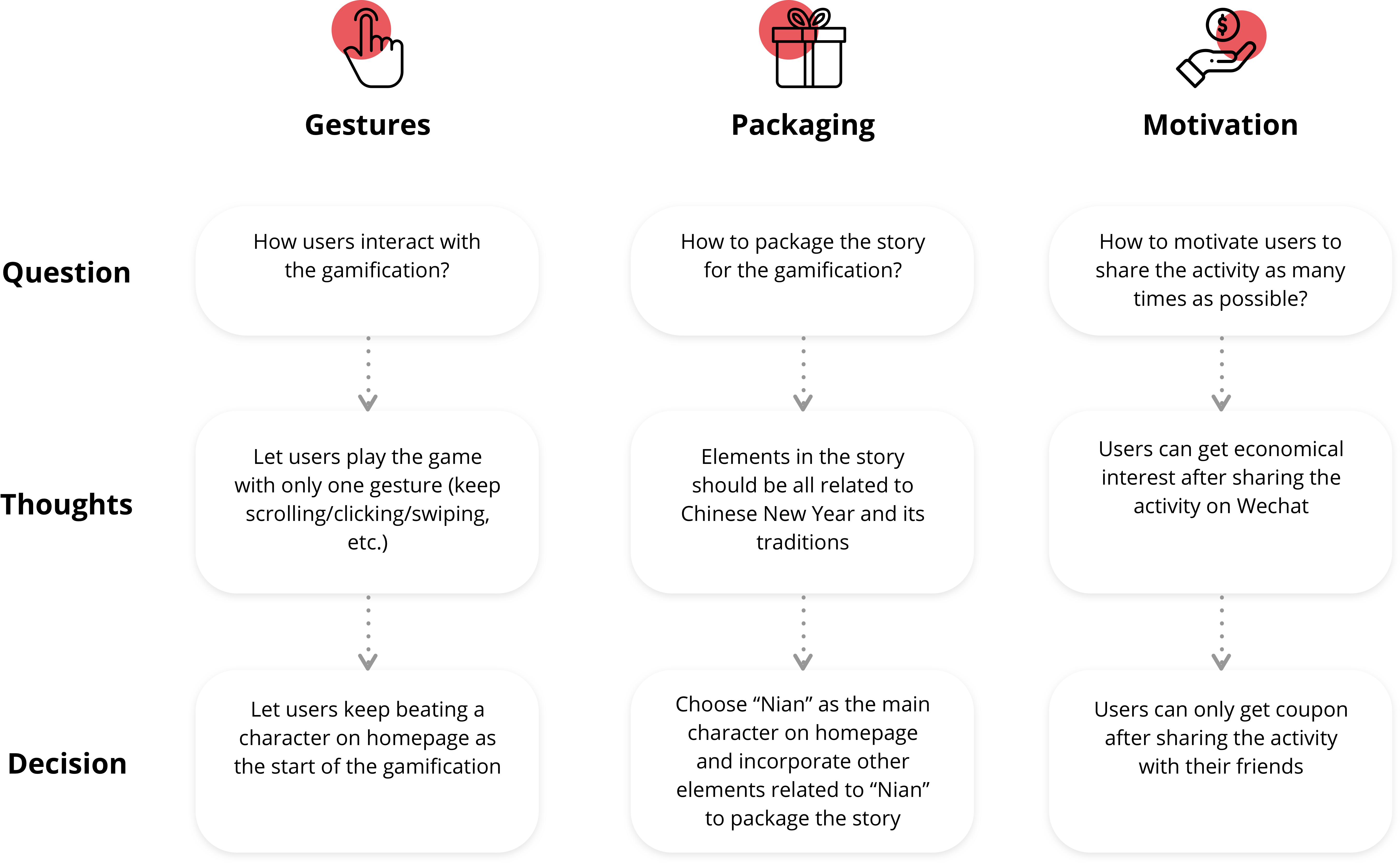 Why choose "Nian" as the Character? 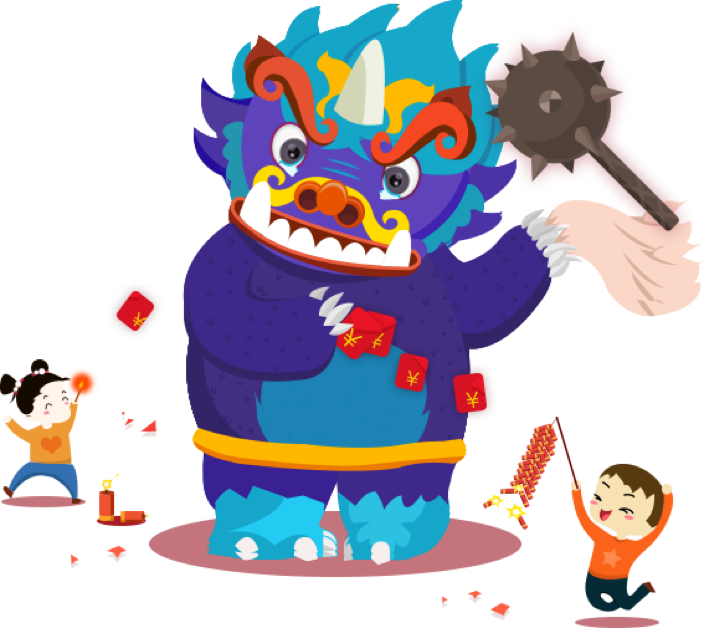 •  Story behind Nian is the origin of Chinese New Year:
In Chinese mythology, Nian is a beast that goes to the village to eat the crops and the villagers at every beginning of the year. People will beat it, set firecrackers, light red lanterns and wear red robes to scare it away, which become the origin and customs of Chinese New Year.
• Evoke festival atmosphere:
Letting users beat Nian to get red pockets caters to the special timing, evokes the atmosphere and lets people recall the traditions. 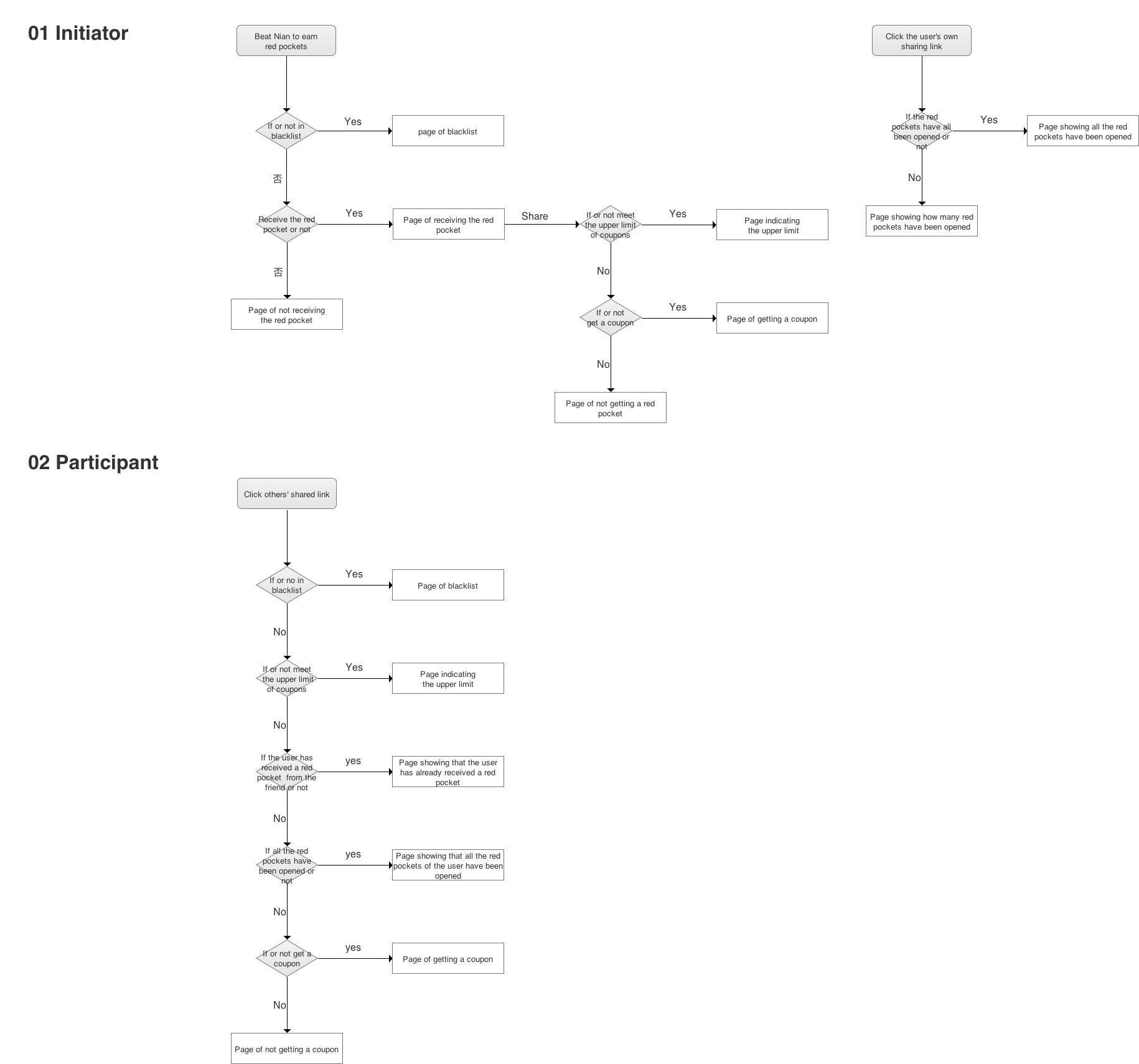 According to the flow chart, I drew the mid-fidelity wireframe and polished the copy several times to better guide the users how to interact with the gamification. 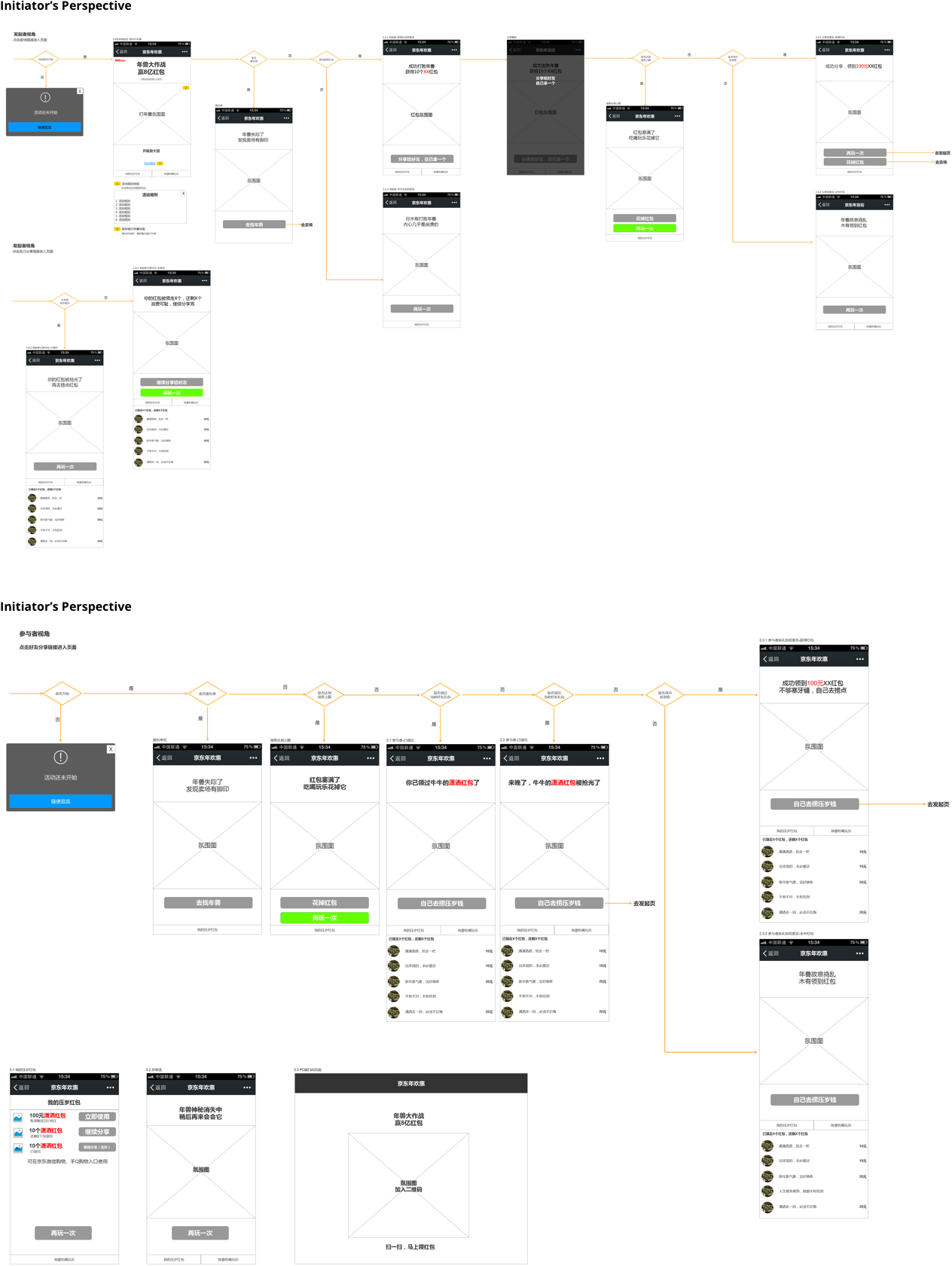 This is the first industry project that I worked as a coordinator and interaction designer. With more than 20 million participants in two weeks after its launchment, it turned out a great success. My key takeaways from this project are: