My Contribution
•  Researched on people's emotions and interpersonal understanding in VR setting
•  Participated in the ideation, storyboarding, prototyping with Unity, user testing, and concept video making.

In a virtual reality environment, people often lack the cues to express their emotions or to feel the emotions of others. For many, even having a conversation won't give clues into each others' true emotional state.

The goal of this project is to increase the emotional interpersonal understanding via monitoring and reacting to each other's biosignals in VR setting.

To achieve the goal, we designed Heart N' Rate - A Co-op driving game where sound and view are changed based on each player's heart rate and players need to calm each other down in order to finish the race.

It is featured with:
• Two players (passenger and driver) with the same goal but different views and tasks
•  Sound and visual change according to each player's heart rate
•  Two players need to react to each other's emotional state by calming each other down in order to complete the task

In order to understand people's emotions in games, we started by researching on Psychologist James Russell's circumplex model of affect, which describes distribution of human emotions in a two-dimensional circular space. In this model, emotional states can be represented by any level of valence and arousal, or at a neutral level of one or both of these factors.

This model helped us understand emotions in a more scientific and systematic way, which then helped us in identifying the type of emotion we wanted the players to feel through biosignal synchrony. 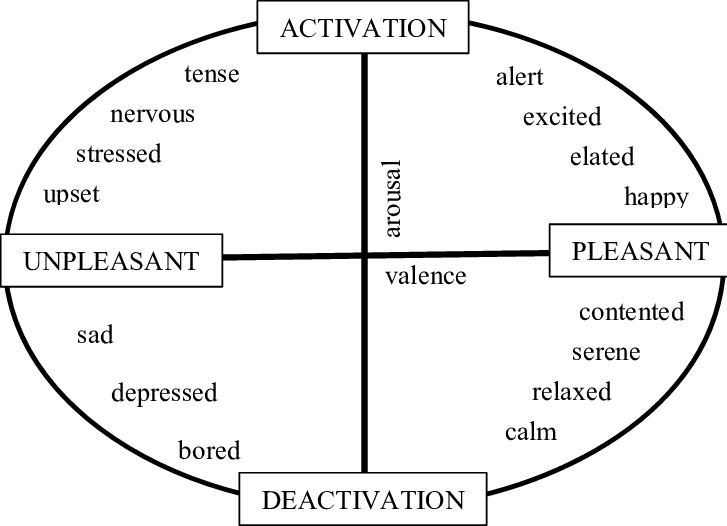 In order to explore people's multiple types of emotions in different contexts, we didn't set any constraints in the 1st round of brainstorming session. We each created our own concepts, and then talked and shared our ideas. 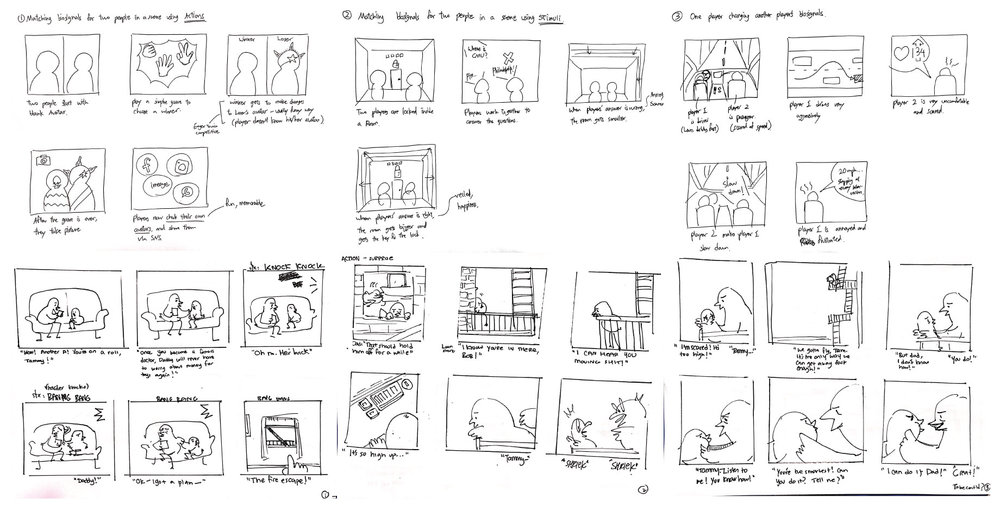 After discussing, we decided to focus on one concept: a driver and a passenger in the same car who need to collaborate and communicate with each other through the journey. We chose this concept because driving is a common situation in which both the passenger and the driver would experience multiple emotions from angry, anxious, nervous, to happy and enjoyable. Besides, in driving situation, the interpersonal understanding between the driver an the passenger is very important.

With the storyboards at hand, we conducted speed datings and got insights as follow:

There are two players in the game, a passenger and a driver. They load into the same car, while the car is already moving. The two players need to reach the terminal point of the road covered with random obstacles as fast as possible to win the game together. Each time the car hits an obstacle, the speed of the car will slow down. With the same goal yet different tasks along the journey, they need to better communicate with each other in order to win the game together.

•  Driver cannot see the obstacles on the road, whereas driver's task is to control the car to avoid the obstacles to ensure that the car is in high speed.

•  Passenger can see the obstacles on the road and his task is to guide the driver to turn left and right to avoid the obstacles.

•  When the vehicle hits an obstacle, it slows down and screens turn red for a moment to indicate the collision.

•  When the driver's heartrate reaches 110 BPM, the sky turns red and the background music gets louder, impeding the communication between the driver and the passenger.
•  Therefore, they need to calm each other down in order to better communicate with each other and win the game together.

This is the first time our team learned Unity, because of the short time we were given to develop, there was still room for improvement in future versions:

In VR, you can try different kinds of senses to tell the story

This is the first time I designed for VR, which is a completely different experience from my past experience of designing for screens. The biggest difference is that in VR, you can use almost all kinds of senses,  sight, hearing, feeling, etc, in a space where there is almost infinite possibilities for storytelling and interaction. In our design, we used both sound change and environment change represent the biosignal and emotion change, which is an interesting exploration.

I was struggling finalizing the storyboard and rules of the game, since without any experience in Unity, I was very worried about how to realize the functions. Luckily, it turned out that you can always start from the most basic features and then iterate and explore step by step.